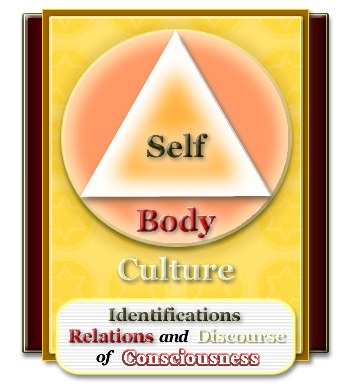 State of being; awareness of difference. One is at a certain frequency, time-mode or paradigm aware with a way of differentiating depending on the knowledge of the self (identifications), the body (relations) and the culture (discourse). Filognostically one speaks of cultural and natural consciousness: a relative and unstable materialistic form of consciousness which, based on material motives, manipulates the time and a consciousness based on the respect of the order of the sun, the moon and the stars, as seen in the sky.

On the basis of this table it becomes evident dat the soul as the conscious self of the regulative principles (vidhi) is found when there is equilibrium (the blue fields) and integration (all the fields white and blue) in the three basic values of the divine of the eternal, the blissful and the conscious. When one of the soul, is one considered top be conscious. is one of the ego (the white fields) speaks one consequently of being repressive, unconscious, narrowed, reductionistic or less conscious. The ilognostic integration of the separate views then constitutes the equilibrium, the conscious of the complete of the soul that in all vision is present in a equal amount as the silent witness in the here and now with the (in the blue fields) described characteristics. So what it's all about in self-realization - or the in emancipation developing of one's consciousness - is to find the correct fulfillment with each degree or with each phase of of the evolution of one's experience with the matching basic vision.

- The self (psychoanalytically: the es) finds its fulfillment in the impersonal of the natural truth and is then stable or eternal. To the principle is the self spiritual but not stable and in the political is the self either at its place or of awareness concerning the person.
- The ego cultivated as a form of science or a religion offers an I-awareness which finds its fulfillment in the blissfulness of the principial fundamental to the reality of the soul. In the scientific with its paradigmatic struggle and uncertainty finds the ego in the impersonal not really the satisfaction of the equilibrium and taken personally turns the ego into a religion not directly according or peaceful with the other ego's in that context (analytically it is then: superego).
- Wisdom is best at its place in the personal because it then results in a consciousness which, as well recognizable in the transcendental as in the concrete of matter, has its place and meaning. Together with the impersonal self that is eternal and the blissful I-awareness that is principial is, is then the consciousness complete or filognostic (âtmatattva, of love for the knowledge or of the reality of the soul). Wisdom taken impersonally runs into an endless discussion of truths, facts and opinions which, despite of its stability, is constantly looking for its completeness and integrity. To the principle one may with wisdom analyze many a thing, but then is also, despite the in meditation found satisfaction, the integration questionable because the colliding of one analytic ego with the other (the conflict of schools). In the analytical there is no automatic respect for the integrity of the knowledge, or for the the person.

Concerning the integration of the soul in the filognosy it is also true that, bereft of the happiness and the stability, the wisdom one has is all too personal; that bereft of consciousness and stability the blissfulness is of a principial ego which doesn't reach beyond the moral lesson; and that without the consciousness of the person and the happiness of the principle the stability is impersonal and factually empty, completely dry and materially senseless. Thus it becomes clear with the views in combination with the qualities of the soul that one can only speak of a comprehensive filognostic intelligence which due to transcendence is free from an estrangement which is the result of false ego or identification, when the integration of that filognosy via the different levels is achieved by means of the uprooting of the hypocrisy of the illusion of the egotism of each of the twelve forms of being conscious or unconscious.