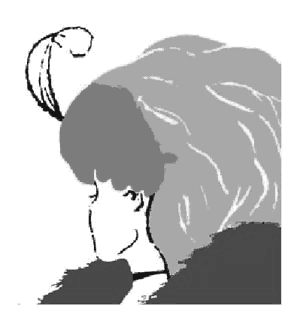 An optical illusion: what do you see? <br>an old lady or a young girl?

Something false taken to be true. Usually applied to the difference between being materially identified and spiritually directed. The impermanent or material is considered illusive as it is doomed to change while the management of the form, the spirit resulting from alignment with the soul, and the soul itself is considered eternal as it refers to the invariance of self-awareness and the reality of change, time itself.

Thus one has to the concrete of nature the three basic elements of which we are certain and are there also the three disciplines of the respect for the integrity of the completere thereof. Set against each other one thus has a scheme showing nine realms of knowledge of which we either speak of illusion or truth, depending on the quality of the equilibrium one has to the civil virtues of the alignment with the soul:

Vedically seen is illusion the 'not-this'-awareness (mâyâ). The mantra to curb it: neti, neti or: nor this, nor that.

Filognostically we speak also of illusion with the supposition that a single form of logic would be the only form of logic in association with the three basic disciplines of one of the four operative causes of the person, the form, the norm and the doer: the logic then may be true and valid, but is nevertheless a perfect causal illusion because one is not aware of the fact that just as well, with another order of reasoning, another just as valid type of logic may be found. In materialism this type of illusion is common practice.