The object of sentience that by definition of perception must change (its place & form).Matter we know in three: solid, liquid en gaseous. Light is the thinnest form of matter van matter. Light particles may, quantum-mechanically, also be waves. They are in fact packages of energy behaving according the way one treats them. That is what quantum mechanics? means in physics.

How matter originated and to what it belongs: 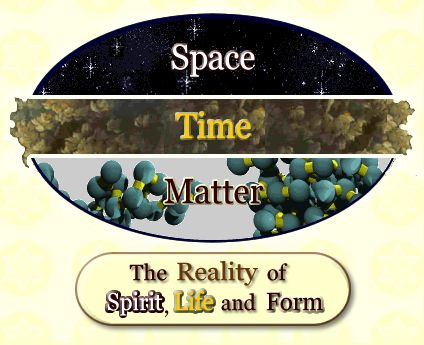 Matter constitutes a basic element of nature; in reality we have three of them: the time, the space wich as a force field is also called the ether, and matter. These elements cannot be reduced to any other element, and are therefore called basic elements; a kind of holy trinity fundamental to the entire creation of spirit life and form.

A condensation of energy:

Matter is seen as a condensate of energy in many different forms or atoms: the primal ether or primal potency of the force field of timespace concentrated itself in the beginning of the creation electromagnetically, solidified so to say into clusters of galaxies and planets around stars, because the primal energy of the big bang, as a reaction to the intial expansion, was subdued to the conditions of cyclic time. Thus after an initial expansion - the big bang - rose a countering power, the attraction, which next condensated the universe and conditioned it in patterns of spin into life forms.

Matter owes its existence thus to the fact of the opposing forces of nature of attraction and expansion wich together make up the equilibrium of a relatively stable universe. Matter is a manifestation of the principle of attraction in the universe which is founded upon the cyclic of time. For that reason is matter always in flux, the way the greek philosopher Herakleitos? said it: panta rhei, everything is on the move. Relating to matter one also speaks of gravity: great quantities of matter like the planet earth form a kind of magnet which keeps together all the energy and attracts objects in outer space like the moon.

Matter as an one-sided opinion

We speak of materialism when culturally is not sufficiently taken notice of or counted with the two other basic elements of nature, knowing the factors of 1) life (the threefold of natural time) and 2) spirit (which is the result of the difference created under the influence of the ether), and one thereto on to thirdly pushes off against, or is in denial with, the integrity of the three basic elements: de person in a narrow sense or God in a broader sense (see further under materialism).

Matter is called prakriti , the primal ether of the undifferentiated energy is called pradhâna , the ether is called akasha and kâla is the time which threefold is also called trikâlika , and the person of God, the integrity of the so-called complete whole (om purnam ) is the purusha . All these terms are fundametal concepts in vedic philosophy.