Filognosy knows many forms of uniting in the social/ideal field of public associations; especially sportive and religious (see fields of action). To unite one's consciousness is, to the three forms of yoga, known as:

Succinctly said comprises uniting in filognosy prayer, labor and knowing. Upâsana is the vedic term for dedicated, devotional activities or bhakti. In terms of labor is it also called karma (not to work, 'unemployment', charitable activity, unmotivated labor). There is an illegal fourth form of uniting oneself in doing work and that is to unite in adharma or unrighteous acts, in other words, in crime. Vedic it is called vikarma.

<br> <center>Any man of knowledge knows <br>that strong attachment is the entanglement of the soul, <br>but that that same attachment managed by devotees<br> opens the door to liberation.</center> <p align=right>Vyâsadeva S.B. 3.25: 20

To unite in sex is vedically called tantra yoga or simply tantra. The use of this term is there next to the alternative vedic meaning of 'ritual text' (see New Oxford American Dictionary). Classically is tantric sex, in which one is focussed at meditation and not at an orgasm for that matter, divided in three:

*heroic (vira) different partners, but less attached.
*animalistic (pas'u) faithful to one partner, but more possessive.
*divine (divya) only sex for offspring, the rest is subliminal. 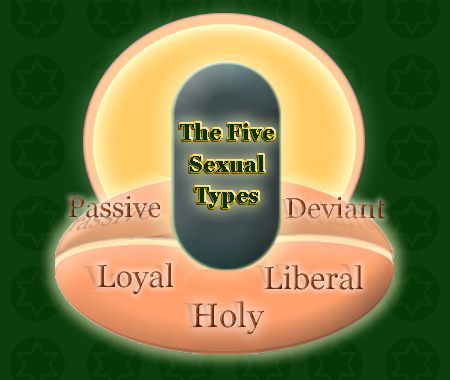 But filognostically we discriminate five forms of sexual behavior on which one may meditate to unite body and spirit.

To unite in sexual activity belongs, on the basis of the regulating principles and the values, for the active types, to the spiritual discipline. Religious is one either inexperienced, passive sexual minded, of holy of self-control and intention. The rest of the not abiding by the rules and regulations with the sexuality, is then abuse and a sin religiously spoken. Filognostic we then speak of profiting which necessarily must be atoned for (religiously: penance or tapas). To be Holy of control, but go without dharma or discipline, in other words desirous after enlightenment but not willing take responsibility, leads to demoniac possession (to the falsely uniting of oneself, see also vikarma above and schizoid en schizophrenia).