Views ('points of view, vision, philosophies, darshanas) A vision, or point of view, means that one, depending a certain culturally transmitted form of knowledge, in one's service to it, with a personal positive perspective on it, is freed from a type of individual work load, which as well genetically as culturally is inherent to a continuing soul - or self of principles - , being a witness of changing material conditions. 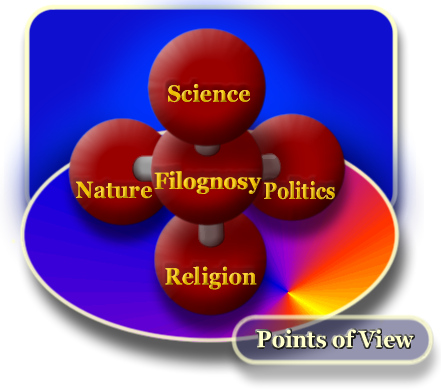 The intuitive basis of spiritual and analytical filognosy as a center point embedded in between philosophical considerations concerning our nature, science, politics and religion]]The syncrecy of filognosy, or the mutually favorable translation of the different humans points of view in the love of knowledge, has as its result that the basic notion of it is embedded as an atom in between the two most salient human views in life, religion at the one hand and science at the other. The international renown dutch scientist and expert in the gnostic field, Gilles Quispel, formulated gnosis as such indeed (see pict.).

A third point of view which to this emerges in the filognostic predilection for comprehension, is the one of methodical considerations, of philosophy, relating to the human and greater of nature as a part of the interest of the factual of science; and a fourth point of view is the one of modern democratic politics in which the comments and insights of enlightenment in response to a more traditional, religious and social cohesion and dogmatism, arrives at a selfresponsible, practical and societal lead. For gnosis, filognostically seen, can't be mere thinking. Filognosy thus being complete as a special, extended form of gnosis, as a form of spirituality around the regulative principles - the translation of the basic human values into rules of conduct -, consists more narrowly and principled taken, itself, dualistically seen, at the one hand then of:

Traditionally religious had the monks that discipline for Christinality in their grip with the rule of Benedict: obedience, poverty and chastity combined with a vegetarian diet. In the twentieth century conversant with more spiritual teachers, awoke Christianity to the notion that this rule was the spitting image of the vow of yoga (the yama) as we know from Patanjali.

Thus continuing the argument intuitively are we in summary dealing with the six different visions in and around the concept of filognosy. The filognosy, which 1) to the principle of the duality of spirit and matter is called analysis and 2) to the transcendence in the discipline consists of the spirituality of a certain connectedness therein, thus also aims at two points of view more that are directed at the person: 3) the politics of implementing the commentaries and 4) the religion of the service held to the honor of the hero or the sainly person, and knows further next to that two more views that are directed at the facts of 5) the philosophical line of argument of the, to the method, rationally being engaged with our nature and 6) paradigmatical science seeking unequivocalness with it in models of thought and methods of measurement. In India we retrace these six points of view in the so-called darshanas.

They are the six systems of indian philosophy, syncretically considered to be complimentary rather than contradictory, despite of the diverging and sometimes contradictory nature in formulating their tenets with the concepts of âtmâ en brahma (see also 12.13: 11-12). These orthodox views have in common, together with the heterodox religiosity of the Buddhists, Jains and S'ankarists which rose in opposition with them at the time Christianity was founded a) the upanishadic notion of the cyclic of time in yugas en re√Øncarnations and b) the concept of moksha or liberation from rebirth by means of emancipation and transcendence. The six are often taken together in three fundamental dualities or basic visions of philosophy: the approaches of nondulaity and method (the scientific), the analytical and connected (the spiritual), and the ritual end exegetic (or religious). There is also a notion of progress in emancipation from high to low in this order of appearance.

- Nyâya and Vais'eshika are part of science, the way we also know it in the West; Karma-mîmâmsâ can be recognized in the practices of the civil Hindu with his mandirs and pandits, Yoga is the popular version of the spiritual discipline of connecting oneself with the Absolute and the analytical of the Sânkhya vision is incorporated in the vedântic uttara-mîmâmsâ approach we in the West know as the Hare Krishnas (see also http://bhagavata.org/glossary/k.html#Kapila Kapila and yoga; Wikipedia-Hindu philosophy).

What the views have in common:

It is so, as it is with the original darshanas, that they, to the description of what a vision contends, have in common: