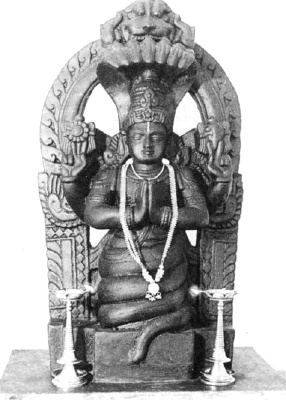 Patañjali, next to Vyâsadeva with his scriptures <br> is the most renown defender of yoga.

Vedic term literally means uniting or unity. It's about the uniting of one's consciousness. It is filognostically the discipline of spirituality leading to stability in wisdom (gnosis), bliss and consciousness.

One discerns many forms of yoga, but one mostly speaks of a threefold (trikânda) consisting of:

Hatha yoga, is what popularly is meant with the term yoga, it is the uniting of the forces of the body by means of postures. In that context one also speaks of the eightfold ashtânga yoga consisting of the eight limbs discussed underneath. Raja yoga, a specific school therewith, is a part of that again. Aadhar yoga , the yoga of Anand Aadhar, literally the foundation of happiness, is the integral approach of yoga in the sixfold notion of filognosy.

Yoga is the nuclear discipline of Hinduism, referred to in all holy vedic scriptures (s'ruti and smriti), and is formally an integral part of the six philosophies of India, the darshanas. See further uniting.

The basic values of yoga in which one achieves control by fortitude and detachment (abhyâsa and vairagya), are known as the legs of the bull of dharma or the vidhi: they are satya (truth), dayâ (compassion), s'auca (cleanliness) and tapas (penance). These values are implemented in filognosy as the foundation for its moral reality, principles and virtues.

The vow of yoga

The basic confession of penance in yoga is called yama it says in Sanskrit: ahimsa satyâsteya brahmâcarya âparigraha yama; it means nonviolent, truthfull, without stealing and celibate, not striving for possessions.

Angas, as levels of transcendence

The eight levels of transcendence one speaks of in filognosy are derived from the eight angas or limbs of yoga:

Like in yoga first respecting the don'ts of the vow to follow these principles (yama) and following the do's of regulating the activities as discussed (niyama), after which you sit in postures (âsana) to regulate your breath (prânâyâma), turn inward (pratyâhâra) and concentrate with a mantra (dhâranâ) to meditate (dhyâna) and find absorption (samâdhi) and stability in the self, is also your whole life in filognosy a process similar to such an individual exercise. One should not think all too linear about the following enumeration.

One may go from low to high, from the ethereal to the material, with these levels or areas of interest of the eight-fold yoga in your life climbing to heaven, but equally you may descend to be of concrete actions and presence this way. This ability to go up as well as going down is the (âroha/avaroha) quality of having matured in filognosy, of having that love for the knowledge that you and the rest of this world need to survive, be motivated and rejoice.

Sâdhana, the discipline of yoga

The discipline of yoga follows the directives contained in the yama and niyama angas or limbs of the yoga system. What one actually does in yoga can be recognized as relating to the two dimensions of the three types of yoga on the one hand and the three disciplines of realization on the other hand. These disciplines concern the specific actions to find integration in respect of the facts, the principles and the person. For each department of sâdhana discipline there are typical activities that can be divided over the three types of yoga. Thus there is for the discipline of brahman realization, the realization of the spirit of the absolute, the action of writing to overcome one's karma, the action of studying to be of devotion and conscious consideration or deliberate thinking as the action in service of the jñâna department of yoga. Even so is there contemplation as karma yoga, preaching as bhakti-yoga and meditation as jñâna-yoga for the discipline of realizing the Paramâtmâ, the Supersoul. With the Bhâgavan discipline there are the typical actions of practicing mantras, of singing and of listening that are specific for respectively the karma, the upâsana (bhakti) and the jñâna aspects of yoga. Each of these different aspects of sâdhana can be found and practiced for each separate discipline. The table to the right only suggests the actions that are typical for each type of discipline, they do not exclusively belong to them. Sâdhana, the yogic discipline thus constitutes a path, a pilgrimage so to say, of step by step, action by action, going inward to reach His abode and personal integrity, to find His sat, cit and ananda, or stability of consciousness in the happiness of God. (see also under emancipation for the process of elevation). Below follows a list of tips and tricks of importance to a successful yoga practice.

Practical tips and tricks for the beginning yogi