So for instance at longitude 30 East from Greenwich one is 4 times 30 = 120 minutes (two hours) later than Greenwich Worldtime of GMT, Greenwich Mean or local Time (UTC, also called Universal Time).

West of Greenwich gives the number of minutes earlier than UTC. To have the exact of true time one, as said, then has to add or subtract the minutes according the table of the Full Calendar of Order. Positive values must be subtracted, negative values added. (know also your local zone-time and the timezone table of the Greenwich 2000-site , or click here to see a map and/or an update). One's calculations are proper when 12 o'clock true time shows the noonshadow of the sun exactly north/south. (in other words accords with the 12 hour-indication on a sundial). There is a calculation-helper to set a clock to the sun quickly. 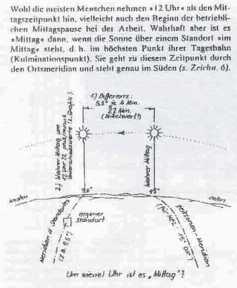 The sun passing the meridian is in the south

The meaning of the colors of the table contained in the Full Calendar of order:

-The beige fields are the normal Cakra weekdays (note that this calendar does not show the 7-days- regular division of a normal calendar).

- The red fields constitute the lunar calendar with at the bottom the old roman numerals for the original count of the months. K means Kalends and is the new moon. N means Nones and is in this concept either the first or the last quarter originally the romans didn't count the second quarter). The I means Ides and indicates the full moon.

- The two yellow and ochre fields indicate the dates on which the Galactic old and new years day take place of having earth the closest to the centre of the galaxy (see The Galactic Order).

Below the table of this Full Calendar of Order there are suggestions given for the use of this composite calendar.

N.B. The table has a shift of phase in the equation of time of 1 day in 25 years.

*: Leaping is for the Cakra calendar done the 21 of dec. so that in a leapyear all indications of the cakracalendar shift for one day after this day.

or go the page about the Cakra Calendar

- Timezone table of the Greenwich 2000-site

- The Galactic Order: everything about our timing to the center of the galaxy.

- The Lunar Order: about our timing to the moon.

- Tempometer: set a clock to the sun